I came across this 3D-manufacturing technique, which uses a gel as a suspension material (see video below).It offers a few advantages over regular 3D-printing techniques.
Inspired, I started to wonder if this can be applied into the biofabrication domain.

So, due to my limited knowledge of biology, my question is:
Are there any biomaterials that can cure/harden in the absence of air/oxygen?
By melting, microbial processes, growth processes, symbiosis…
Example: molten (bees)wax could be used to produce some temporary molds or objects.
But perhaps there are far superior bio-resins, composites,bioplastics,… that can be used.
Any ideas?

Some artists use a similar technique to create art inside gelatin.
Perhaps, a controlled, thin film injection (as seen in this videoclip ) following a 3D path could be used to create a seamless ‘fabric’ item, which would find applications in fashion.

In my own humble opinion, advanced bio3Dprinting would be revolutionary

This is completely @Elise 's domain in her phd!

Not sure about possible materials that answer your question. Perhaps anaerobic bacteria that produce some sort of material… Interested to read other’s thoughts.

What is the kind of application you’re aiming at with the 3D-printing?
Is it aesthetics (like in the video of the gelatine), then you could use some colourful bacteria or algae (see workshop of Glimps tomorrow: https://www.facebook.com/events/470806270023001/.)
If you’d need more structural, self-standing objects, join the research, cause we’re looking for that

There are some applications in medicine. I can send you papers explaining the procedure, but they usually print with cells or bacteria (which are not usable for making structural objects). Until now, all organisms I found to be interesting for biomaterials need air, somehow… but there are a lot of organisms, so it might exist! Corals for example, grow under water…

Talking about coral… some proteins of squids are also used to make materials: https://www.nature.com/articles/srep13482

I have no particular application in mind, just exploring some possibilities in manufacturing, not aesthetics.
So I’m indeed looking from a structural point of view (as I have a background in industrial design).
But thanks for the info, I’ll look into it!

Just a quick idea for your research about creating structures could be this, based on the clip above:

I learned mycelium needs oxygen from a workshop I attended.
Maybe you could extrude a hollow tube inside a gel medium, where the extruded medium could be a paste of hemp fibers and mycelium. The technique could be similar as the videoclip above, so that the gel provides suspension and just enough resistance to battle gravity and prevent oxygen from bubbleing to the surface.

The extruder needle injects air in the center. If the needle can follow a 3D path without the tube collapsing, a mycelium could have an environment where it can grow into a free form 3D structure? If there is not a sufficient amount of trapped air, you could extrude the tube up to the surface of the suspending gel. In that way you have a kind of vent that connects to the air outside the suspension gel and there is a continous acces to oxygen inside the mold.

A needle might be the wrong word, but look a it as it would extrude eg: a 15mm outer diameter tube. I did not give it some thought or research yet, so there’s probably loads of limitations, but who knows

Thanks! This is very interesting matter to reflect on. I was also developing the same idea to add air this way, but with different needles. Print the matter first, then add air bubbles. Your proposal to do it in one needle is intelligent! Only, the tube can collaps, during printing but also afterwards… Unless the airflow is not constant… So you could have a tube that opens and closes.

Yes it could be prone to collapsing during and after printing. But that’s why I thought about using a “paste”. By controlling the viscosity and diameter, you could end up with a stable mixture. Thicker paste and finer diameter could provide just enough stability to prevent deformation under gravity or hydrostatic pressure of the suspension gel.

Another but different idea of 3D-printing without gel could be a hybrid between lost wax casting, and co-extruded FDM 3d printing. You could build up hemp x mycelium paste layer by layer and use (bees)wax as a support material. A tweak to introduce air is to print small holes/channels (“pores”) into the wax layers. The end should be your object, but encapsulated by a wax skin covered with tiny pores.
You can let the mycelium grow until it’s ready.

To finish, you heat up the object, melting the wax (and retrieve for reuse) while also drying your mycelium model.

Maybe that is more feasible?

Limitations will probably be wall thickness of the mycelium, so that the air is evenly distributed within the growing fungus and it grows more predictibly.

You should come one day to the lab at the VUB, so I can show you the infrastructure and the machines we have for 3D printing. I’m sure it will inspire you

That would be cool, let’s meet up! 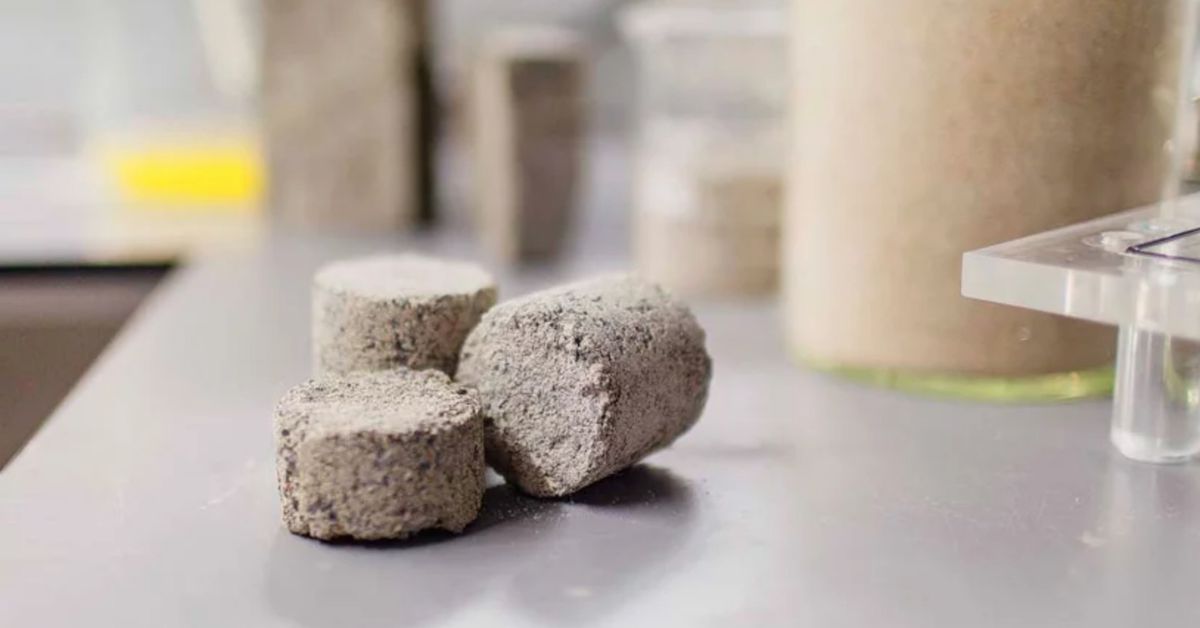 Once you get past the initial ick factor, it’s not really as strange as it sounds.

Pairing the method described in this project with this type of printerhead:

The KIT includes the robust lignt-weight and easy-to-use print head (Auger extruder) and powerful motorized syringe pump for direct volumetric clay feeding. This can be installed in the most of desktop FDM printers fo print with clay or porcelain....

If the sand-urea-bacteria can be suspended into a thick gel, then this might be something?

That’s awesome, reserve me a seat!
(I’ll leave the urine at home

What kind of bio-brick would it be?

I ran a quick experiment, tinkering with a dried SCOBY.

As I saw one 3D-printing paper pulp (plantbased cellulose) recently, I thought this would be cool to try with the bacterial cellulose. Haven’t seen that here in the forum.

So I ground up a small, fully dried SCOBY with a coffee grinder. I stopped when it was not yet a powder but rather small flakes/crumbs smaller or equal to 1mm. It was about 2 tablespoons full.

I then mixed in methylcellulose powder (wallpaper paste) as a binding and gelling agent. After that, water was added drop by drop until a relatively dough-like consistency was achieved. I molded and pressed that one into a little sheet to see how this would behave once dried. I then further diluted the leftover half part with water and transfered this mixture into a syringe to see if this could be extruded. This went surprisingly well! The gelling agent made it stable enough to create a small heap that did not sag. Details from the messy, uncontrolled syringe extrusion also preserved well during the drying process.
Ugly, uncontrolled objects, but fine for now!

After drying, I found these objects to be a lot harder and less brittle than I expected them to be. The compressed sheet can handle some significant force before cracking and is resistant to carving with a pointed aluminium pin. The other objects were of similar strength, but could flex a few degrees. That is probably due to not being compressed. But this technique could potentially create hard, rigid shapes!

They even displayed some degree of polishing where I decided to cut one of them.

There obviously was some shrinkage, especially on thick pieces where sinkmarks could be seen on the bottom. But the 2-3mm thick extruded parts remained relatively the same. As a side experiment, I rehydrated one and then remolded & dried it again. That actually worked besides a darkening of the color (oxidation?). So that could be an interesting property. I have some more sheets growing and drying to see how high you can “build” with this to determine how it can be suitable for 3D-printing. But also to study stability, recommended wall thickness, recommended water percentage and shrinkage that can be expected. The current quantity was too low to evaluate that.

If someone here knows any other binding agents that could work, let me know! Since methylcellulose -although not toxic to my knowledge- is not naturally occuring, I don’t yet consider it bioproduced.

Wow, awesome! Thanks for the link!

http://www.jannishuelsen.com/?/work/xyliumstool/
As you can see this is an old project from March 2011. I could not find a Jenpolymers LTD co website. There is an address for one in Germany. Maybe we can try to find out more what happened to this project. Maybe the professor passed away? Do we know something about the genetically modified bacteria he used?

Interesting:
Some websites state this is grown “as a skin/coating on a wooden mold”, while the video shows a submerged object.

Maybe the bacteria is modified to not need oxygen to perform the synthesis of cellulose?

The Jenpolymers company dissolved in 2014. I’ll try to look up the patents one of these days. This application intrigues me🙂

Here are some more updates on tinkering with dried and ground-up SCOBY.

The second try, I used some more powdered material. I added water untill it was the had the consistency of something resembling ketchup. I tried creating a hollow cylinder. It extruded nicely through a syringe with a hole of 2,5mm, although a considerable amount of manual force had to be applied. The lack of a consistent path, just freehand with all degrees of freedom, made it hard to produce an even shape. Also, the water to material ratio was way too high and so it collapsed rather quickly and made it into a “blobject”. 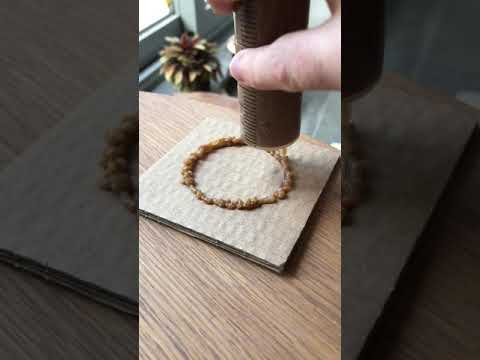 The dried result was really strong. It was very difficult to cut up by hand and even damaged my plastic blender housing when trying to regrind it. It also supported weight.

Here’s a video where I first sawed through one side entirely to try to break it. 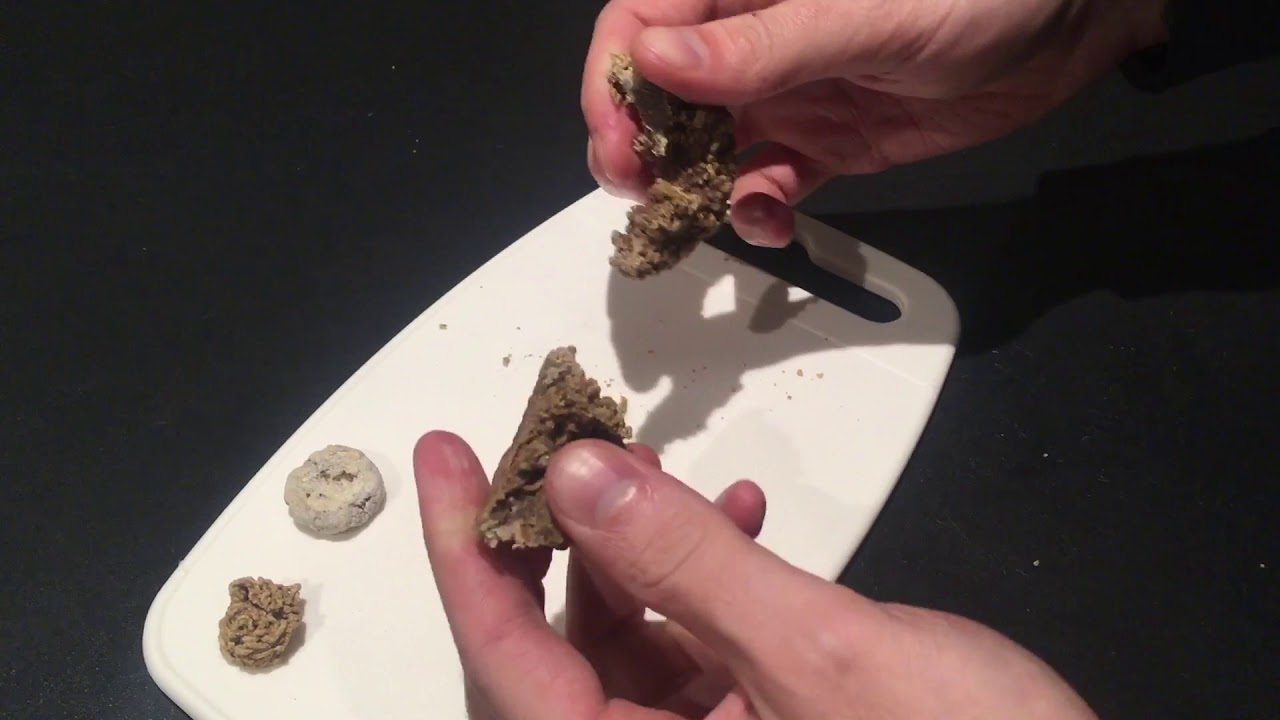 But to achieve predictable shapes, the water content had to go down. Doing this would increase the required force even more, so I had to enlarge the nozzle diameter. After this, I ground all the material into a powder again. It is interesting you can reuse it!

This time, I retried the same experiment and made a precise ratio of 2:1 water and the powdered material. This produces a peanut butter consistency that is easy malleable into a shape. But I chose to extrude it, as this would provide insight in wether this could be extruded or not. The result was much better. Sagging was very limited and it was easier to produce a freehand shape. But still inacurate, due to the material pulling the extruded strand after sticking to the previous layer. Controlling particle size would also help in having an even flow to make it predictable.

There was some shrinkage after drying, but it seems to be uniform as long as wall thickness remains even. This is similar to working with plastics.

The dried cylinder is again really hard and not brittle. It does not break when you drop it. You could definitely make functional, structural, small objects with this as it could handle a load of at least 6kg of force perpendicular on the axis (so on the curved side, the weakest).

The reusability, grinding and remolding or re-extruding, also intrigues me. What could be a nice application for this? Maybe for sending&protecting goods that get sent and transported?

My theory behind the microscopic principle and the strength is that the nanofibres that are arranged in matrices, after grinding, cover a huge surface area. When soaked, each matrix expands and the fibre ends latch into other fibre matrices. When drying, they shrink and so tighten the bond. I’m no chemist or biologist, but I’m curious if someone knows this?

Will definitely do some more experiments!

Note: some pictures aren’t in the right order. Blame my phone