How do I grow mushroom leather?

Its been 3 years since Mycowork’s amazing Scishow video was published, where is all the mushroom leather!
all there is is these lame ass companies milking the novelty right out of the technology, just look at this! 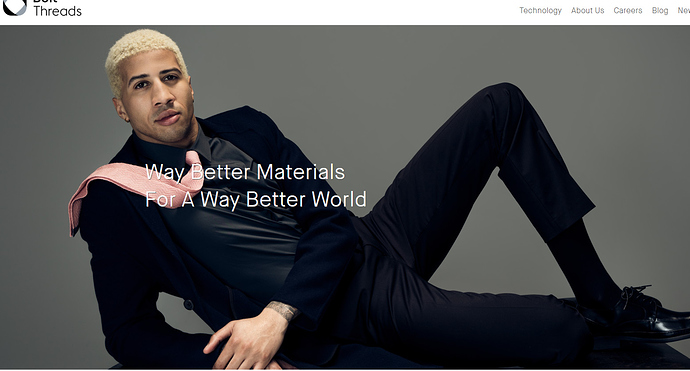 unknown.jpg1561×841 249 KB
if its so ground breaking, amazing and sustainable, why not make actual functional stuff
not all this deisgner junk, and market it to the average person!

so I try to grow some of this mycelium leather my self, I dug into the scientific publications, went on Reddit for help, I even went on an emailing rampage!, to scientists I found on the publications (my emails must of looked like spam, because no one responded) edit one amazing person did!

some of my attempts:
I tried just grinding up the fruiting block, and pressing and molding it 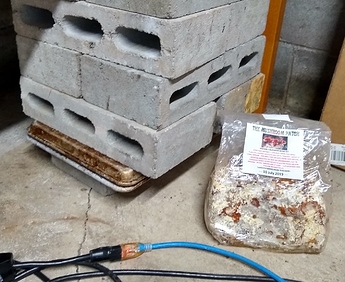 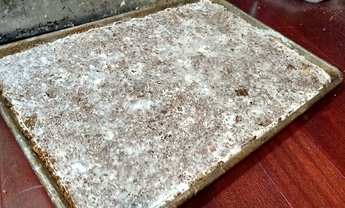 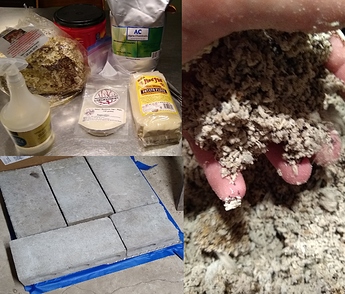 all I want is to grow some mushroom leather, and make some shoes!
so I can impress the nerd hipster girls!\

please help a noob out!
I only need a few pointers, would the mycoworks patent be a good place to look? its kinda hard to understand.

Damn i’m going to try reading all the publications, browsing these forums, looking at Mycoworks, and Boltthreads patents, and try to figure out what the helk Elise Elsacker is doing on her instagram,
than make a procedure, than once I do I am going to grow a sheet that looks way better than Philip Ross can do, and make a detailed instructional video on how to grow it, thats not a stupid novelty art peace like this video! 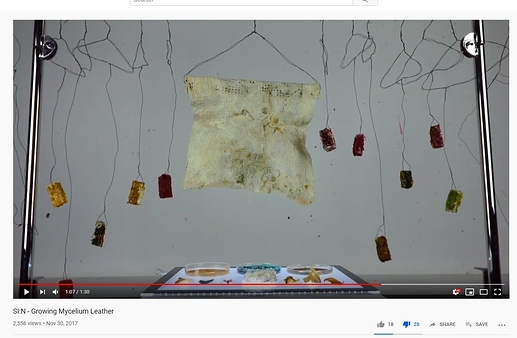 Nice going! So as far as I know the leather is obtained by heat pressing mycelium fluff. Not containing substrate, that is.

Thank you! it seams like there are two methods
I see in the Mycowork’s video they have grow bags of reishi, meaning they press and mold it?,
whether it consumes the whole substraight, or they pull off the mycellium skin.
or
the other one, using Trametes is that they grow a fluffy foam in Liquid and use cellulose sheet to contain it? than heat press it.

I just bought some Trametes LC and am going to try that one out,
along with the orginal mycoworks method 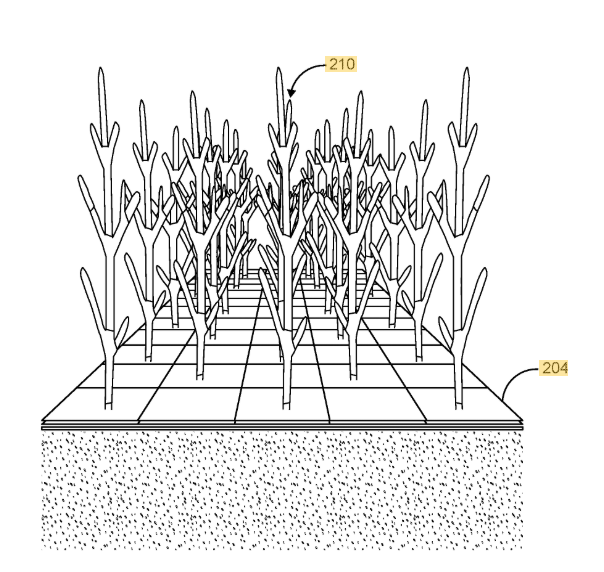 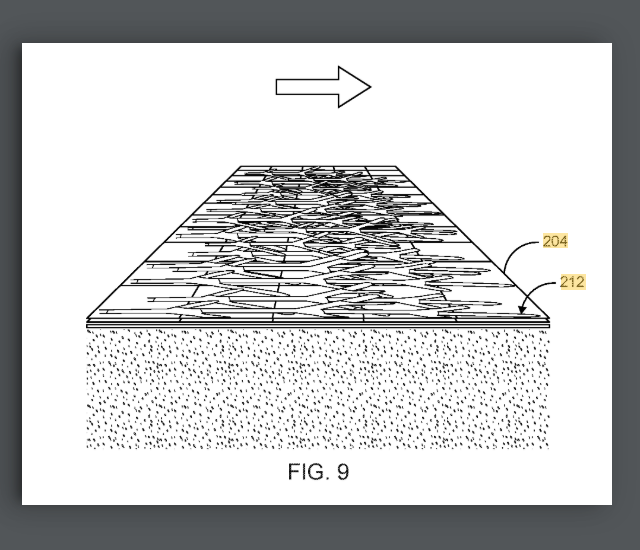 Or it seems like they let the mushrooms grow than smash them down?

I think they mainly work with the upper part as shown in the figures. Other people I’ve seen doing it with LC had really meager results, just slime, smelly and crusty stuff. Haven’t tried any of it myself though… Curious to read if anyone else has experience.

I MS painted a plano mano!
I just assumed it would be hard to read just cause it was a patent,
I really like this method! Philip Ross is genius,
you can reuse the substrate to grow many sheets! 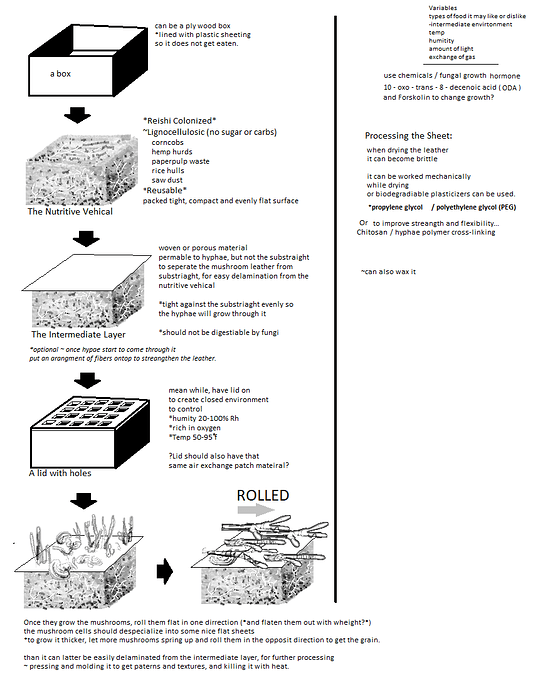 mushroomleather.png850×1100 126 KB
I got to figure out what fabric to use for the intermediate layer, I am thinking of synthetic nylon? because it is really smooth, fine, and not eatable by reishi,
I only got one reishi fruiting block, so I will try this out with a small crate, and if I get some leather!
I will than look into what I should do to cross link the chitosan to make it stronger for my future mushroom leather kicks.
I found a PDF that goes hand it hand with the patent on that part.
: D
1 Like
Macirelli November 27, 2019, 6:15am #7

Hey great work! I’m on a similar mission for mycelium leather. My first attempt was last year with a poorly planned, and overly nutrient rich broth with oyster mycelium. I ended up with a beautiful array of mold and gnats. This round I’m using a slightly more planned out method after stumbling upon this forum and a post by Elise Elsacker about growing on a liquid culture. Good luck and hope to see some leather soon!

I had the very same problem on one of my attempts, my substraight contained way to much carbohydrates when it should of been cellulose ligneous because that’s what Reishies specialized on,
it ended up blowing up with mold, that attempt was in vain to start with
because mushroom leather does actually come directly from colonizing the substraight(like ecovative styrofoam) making the sheet, but having a fabric stretched over the sub straight for which the hyphae will permiate and grow mushrooms which you can flatten / despeicalize into a sheet, than you can even reuse the substrate to grow multiple sheets of mushroom leather, one after another!.

a few other people wanted to work together on figuring out the details of growing mushroom leather
you should join our discord! https://discord.gg/7nBDHMe

doing my first legit attempt, things are turning out pretty well! I got the hypaee through the intermediate layer! 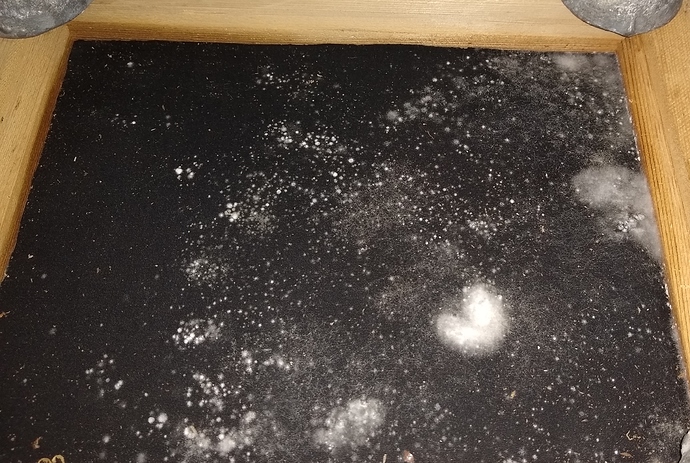 I am interested in learning how they grow it on a liquid. Have you seen this https://www.instagram.com/p/B50sPcRo_ZL/ Looks great!

Mycowork’s method still seams like the way to go, in the video its stronger and thicker. So that first attempt was a fail, but now, working with some others we got it to this point!
But we are still wondering how we can despecialize all these fruit bodies into the sheet
in the patent it says to roll it?
we already got a good idea on how to plasticize it when its in sheet form
by soaking it in lye to break the chitin bonds so it becomes chitosan we can cross link

and are wondering if we do that but its not in sheet form yet, that that can make the fruit bodies
shapable like they do with Amadou
but it doesn’t seem like thats what Mycoworks does

So first we are going to just try putting a lot of weight on top first and see if they will change under pressure.

Here is an update! 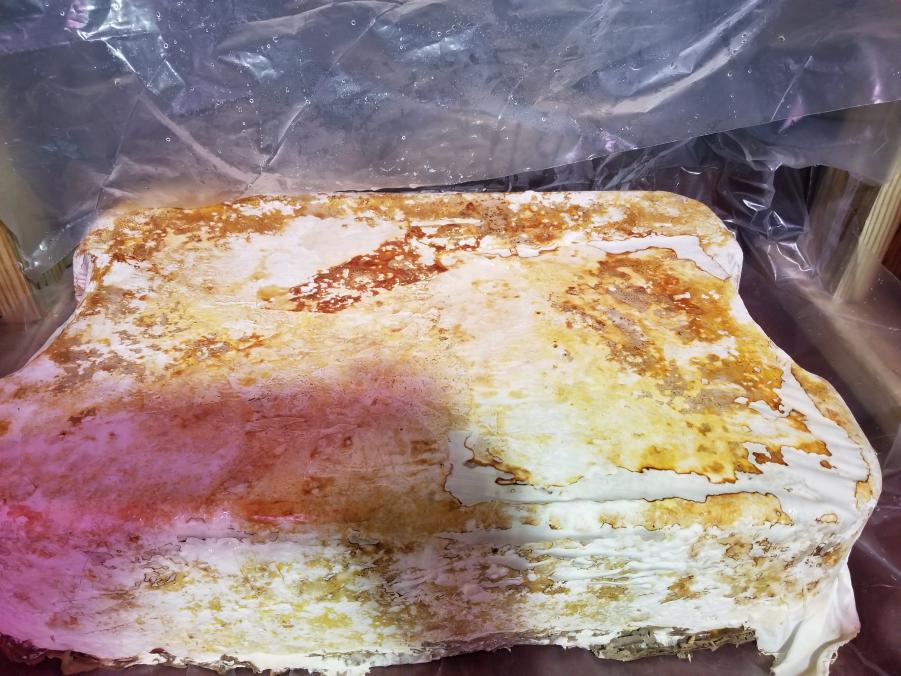 HPIM0451.JPG2576×1920 1.25 MB
Than once it grew mushrooms I broke them off and laid them on top evenly, sprayed with ammonium chloride/forskolin/water than over layed some plastic, and a peace of diamond tread sheet metal to disperse the weight of a huge stack of cinder bricks I put on. And leaving the sides of the block open so I can mist them and it can breath

hmmm.png1091×440 23.4 KB
the idea being that they will despecialize back into mycelium under the stress forming a sheet?
and, utilize the sides to supply oxygen to the top & so it does not suffocate. 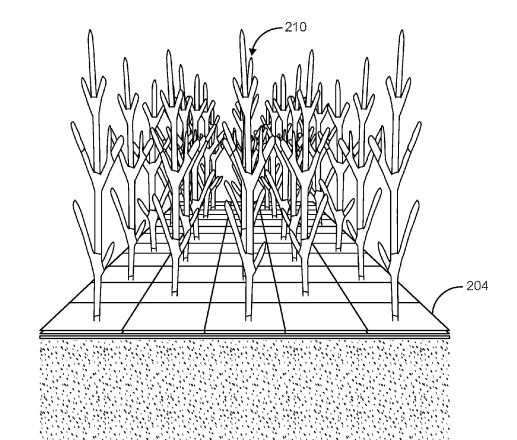 But this could all be wrong, in the patent apparently those are not actually reishi fruit bodies… But a close up of Mycelium!
somehow building up thick deposits of fungal tissue over the intermediate layer? 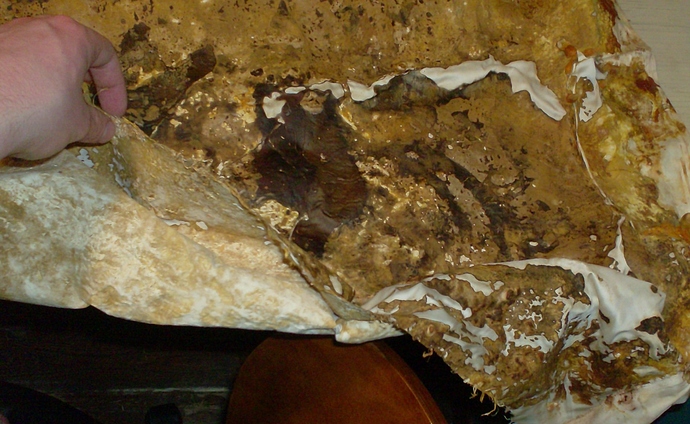 HPIM0443.JPG2288×1408 490 KB
so I pealed mine off to inspect the permeation of mycelium and its pretty thin, in the patent I think it said something about puting an optional arrangement of fibers ontop to stimulate growth, but not sure what that means and how that equates to thick amounts of mycelium growth, like those beautiful sheets in that SciFri video, and also something about spraying with soapy water before rolling>>>>???
I am just a young lad with one simple dream of making a pair of mushroom leather tire tread shoes! why is that so hard! I just wish Philip Ross would join this forum and tell us all how to grow mushroom leather.
I’m going to try reading the patent again the other way around.
also here is a little cross linking I was working on: 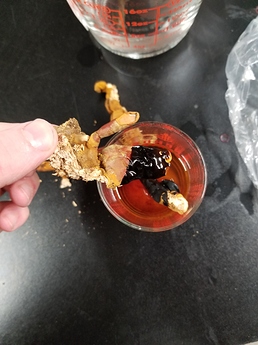 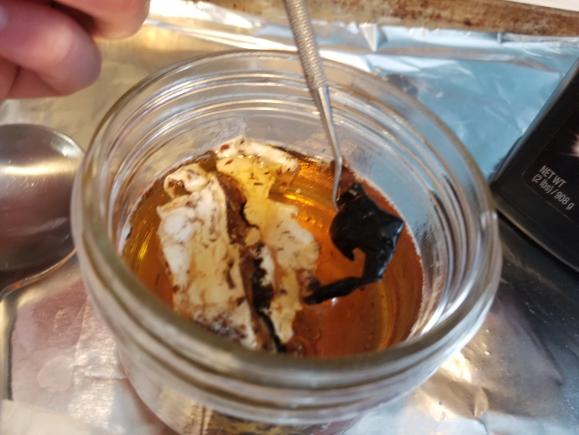 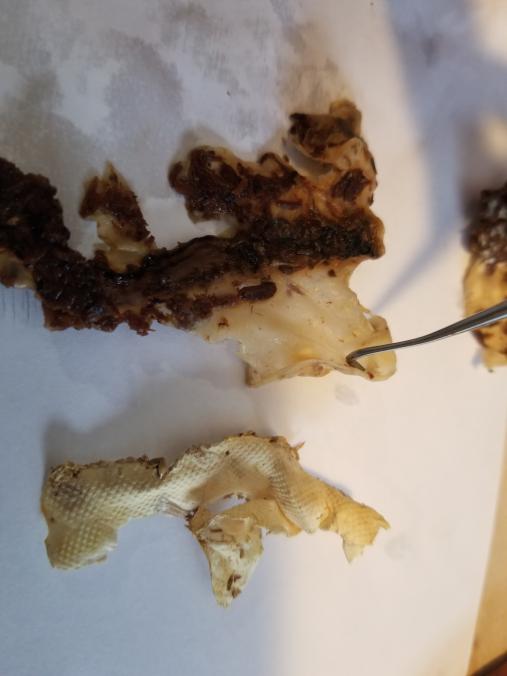 for some reason the lye water turns the mushroom black instantly but not the fungal skin, and than I also used some sodium tripolyphosphate water as the cross linker for chitosan in the microwave and came out looking a little more stretchy, than dried out.
Mackenzie February 16, 2020, 4:56am #13 IMG_20200215_155708972.jpg2608×2304 2 MB
As expected, that did not work/…
so I am going to try getting this strain of Ganoderma called M9726 which is supposed to form a really thick layer of aerial mycelium! from the Belgium place Mycelia
I got to get a phytosanitary import permit first though so they can send it to me. APHIS (does anyone in the states allready got one -I can mooch off of, I will pay shipping)

and another person told me I need to have an enviroment rich in CO2
that is how mycoworks gets their mycelium to stick up like in their diagrams? is that a surface area gaining mechanism of fungi so it can breath? 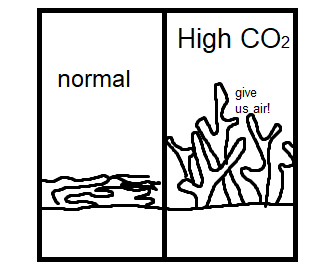 Is this how it goes? 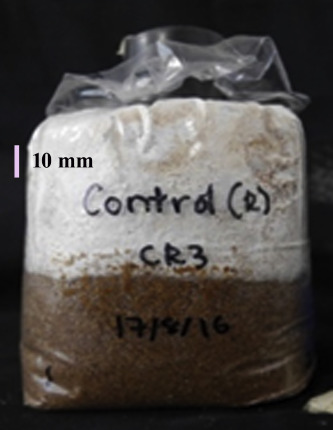 (image from this study)
and there is also mention of using electricity to direct growth,
now sure how to plugin in the anode since we only want the surface or how to do it without burning down my house,
or for that matter how can I boost CO2
only 1 tiny breathing hole in the box? a steadily burning candle?

So I can just scatter a few flakes of dry ice on it and be good to go?
Edit
So is it because carbon dioxide sinks thats why the Mycelium pokes up? Past CO2 layer So it can get air.

The exact proportion, also carefull with freeze burn when applying the flakes but otherwise seem slike a cheap enough experiment. 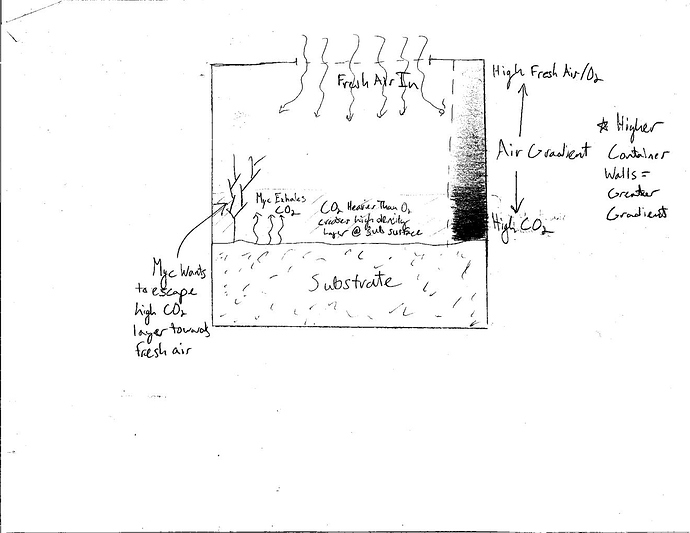 I had reached out to Mackenzie on IG with the advice on changing the air environment to improve mycelium growth. Here is a basic diagram explaining the concept. Keep in mind, there are multiple ways to achieve this result, but you should be able to do this without adding an external CO2 source.
Any questions let me know.

In the patent it says to spray with soapy water before rolling, is that to prevent the ones you rolled down from springing back up, like grass that was tread on? So new ones can grow and build up lairs.

I’m not exactly sure. They also mention tea tree oil. I’d be more inclined to think it’s to prevent mold/bacteria from the constant handling. Or just used as an added stressor to encourage growth after rolling/pressing.

Thank you!
so, so far the method is looking like this? 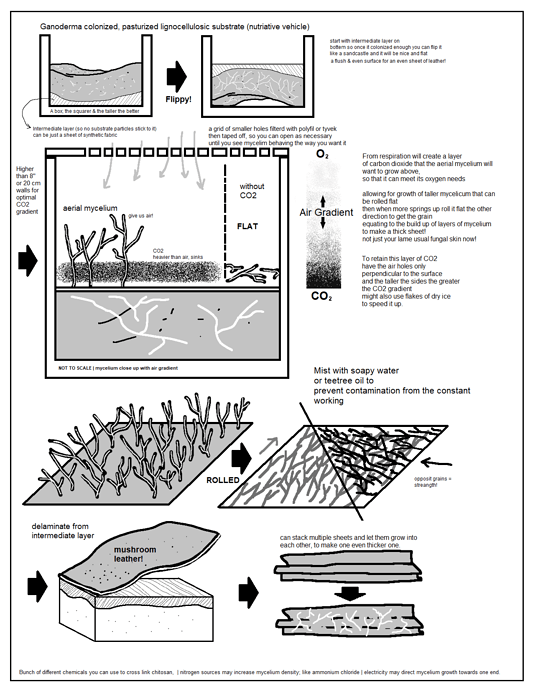